破風 (To The Fore) (Bu-ray release 2015-10-8) is a pro cycling movie from Hong Kong, although it speaks Mandarin most of the time and looks more like a Tai Wan movie.  While pro cycling sounds less exciting than car racing, there have been many movies about the latter but very few about the former.

In addition to the formula of typical sports movie, it has every imaginable thing to splice it up: friendship, love triangle, drug abuse, gambling, beautiful scenery all over the world, and competitions that look real with help with from many real cyclists.  As with car racing movies, we also have crashes here.  I’m surprised to find that cycling crashes are actually more brutal than car crashes, because with car crashes we usually see some metal jumps up, do a few spins, crashes down and explodes with fire.  Here we see (CG) cyclists perform that instead of some non-living metal, and after they crash down they get cut by another cycle and is hurt seriously.

Instead of being a serious sports movie, it takes the direction of being entertaining, and does it really well.  If I have to name a flaw in this movie, as a sports movie it’s not very believable, but I’d say entertainment is more important.

Miracle: Devil Claus’ Love and Magic (Blu-ray release 2015-5-27) is a Japanese movie about a love triangle around Christmas time.  A woman is secretly in love with her childhood friend, but still helps him pursue a Korean beauty he just meets and believes to be his destiny.

This movie adds a unique twist by having an animated imaginary character who offers his own wisdom, adding an interesting aspect to it.  Story wise this is pretty standard but it’s still slightly charming without trying hard to be a tearjerker. Lies create miracles.  That’s the theme of Japanese movie April Fools (Blu-ray release 2015-10-14).  There are several stories: a boy who reads the internet, and is led to believe he’s going to be picked up by a spaceship; a girl who is kidnapped by two gangsters who bring her to eat noodles and to a theme park; an old couple who are treated as VIP by everyone; a pregnant woman goes to find the womanizer she slept with, etc.

With so many stories, there are quality differences among them.  At least there are something to like for most people.  The first half of the movie set things up and are moderately comedic.  The second half becomes a tearjerker, and I find parts of it to be heartwarming.  Overall I think this is a competent effort in realizing the lies create miracles concept.

Charlotte is a 13-episode 2015 TV anime featuring a bunch of students who have different superpowers.  The protagonist uses his power to cheat in school exams but is discovered by the student council from another school.  He is asked to transfer and join this student council in order to protect other students with superpowers from being found and mistreated by scientists.

I like this subject.  I also like the jokes in this anime.  I watched it because it has time travel.  There is something missing from the relationship between the protagonist and the female student council president though.  Most importantly, the ending is dissatisfactory.  It involves stupid decisions, instances of not using superpowers when they are especially needed, failing to employ time travel to get the best outcome, forgetting to help someone important when the timeline is reset.  The ending episode is just a mess.

Although I’m not impressed by the songs or the dances in the movie, it does many things right.  I can’t say I love the design of its CG monsters, but I’ve seen worse from Hollywood.  CG-heavy movies from China tend to be disastrous, but this one manages to be quite good.  It has an excellent mix of action, drama, humor, Chinese culture, and there is no major flaw to be found.  Even after applying a discount in its box office due to possible cheating, there is no doubt it got an exceptionally good result in China. 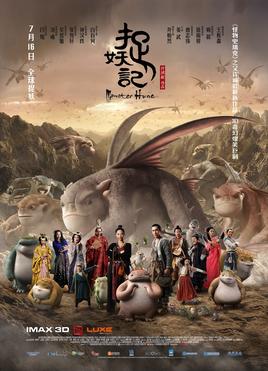 Pixels (Blu-ray release 2015-10-27) feature Adam Sandler and his team saving the world by facing Pac-Man, Centipede, Donkey Kong and other video game characters.  Although not a waste of time, it’s not good either.  It’s occasionally funny, but the rules are not well established, and there are several things that do not make sense.  It simply cannot be compared to other movies that features (instead of adapts) video games like Tron (1982) and The Last Starfighter (1984).

This PG12-rated movie tones down the ecchi severely, but doing this changes the essence of the original manga.  The prologue looks fairly interesting, but what remains is lifting up girls’ skirts – there are lots of such scenes, and unfortunately the movie becomes a one-trick pony.  Unless one is especially thrilled by such things, this ecchi comedy is average, because it quickly runs out of ideas for generating laughs.

I thought Iron Girl (2012) would be a female rip-off of Iron Man, but no, not even close.  Iron Girl, with no memory of her own and wearing a sexy iron armor, happens to find a woman being molested by several bad guys.  Turns out that there is a gang of bad guys who have been attacking the woman’s village for a long time.  Iron Girl trains the villagers and helps them fight back.

Nothing interesting or worthy to watch occurred during the whole time.  It plays like an episode of a masked rider show stretched to movie length, but with far more time-wasting dialogue, and very poor action sequences – again below the standard of an average TV masked rider.  Even the climax steals an idea from masked rider.

It is hard to understand why this trash gets a sequel.  Perhaps there are enough fans of Japanese AV actress Kirara Asuka to justify it.

Iron Girl: Ultimate Weapon (Blu-ray release 2015-9-25) feels like a totally different movie.  Although the Iron Girl and her costume is the same, and she still has no memory of her past, everything else is changed with a new background of her world.  Therefore it is not necessary to watch the 2012 movie first before watching this.  She has become a bounty hunter, killing new bad guys and getting money in the hope of buying a device that may help her recover her memory.

The goods news is that the sequel is better.  The bad news is that it’s merely upgraded from trash to average.  The action sequences are tolerable now with comparatively better sword fights.  The sets and cinematography are also better.  It makes better use of the AV actress’s body with more nudity, although simulated sex scenes are provided by a supporting character only.

Of the space-related movies in the past, I’m afraid there are more bad ones than good ones.  I have watched an uncountable number of poor clones of Alien (1979).  Movies about exploring Mars were below average, such as Red Planet (2000) and Mission to Mars (2000).  I’m thankful that in recent years we have exceptionally good space movies like Gravity (2013), Interstellar (2014) and now The Martian.

The Martian, based on a novel, tells the story of an astronaut being stranded on Mars and trying to survive, while NASA finds a way to rescue him.  This movie is exceptionally scientifically accurate (except the beginning storm), more so than either Gravity (2013) or Interstellar (2014).  It’s quite interesting and sometimes funny to watch Matt Damon’s character trying to survive and explaining things to audience in the pretense of recording video log, which is significantly more convincing than talking to a volleyball in Cast Away (2000).  The martian landscape looks gorgeous, and the production designs are top quality, to the point that the NASA sets look better than the real thing.  I’m slightly surprised to see China being a critical factor in the rescue mission, but it actually comes from the book.

There is no doubt this is a really good movie.  I really liked Apollo 13 (1995), so I really like this one as well.  However, from the perspective of entertainment value, as measured by me as excitement, dramatic and emotional impact, I’d say that Gravity (2013) and Interstellar (2014) were perhaps more entertaining.  That being said, all three movies should not be missed.

Forget Me Not (Wasurenai To Chikatta Boku Ga Ita) (Blu-ray release 2015-9-2) is a Japanese romantic movie with an unusual twist: the girl keeps being forgotten by everyone including her classmates, teacher and even her father, except a boy, who manages to remember her.  Again this is based on a novel.

It sounds like that some sort of fantasy element is involved but it is absolutely not.  The movie does not give an explanation at all, other than to compare it to people forgetting their classmates a long time ago.  This major point is not reached until one third of the movie.  Nothing special happens until we reach two thirds of the movie.  I like the climax since it makes full use of the being-forgotten characteristic.  I don’t like movies that have no resolution at the end though.  The whole thing seems contrived to serve a tear jerking moment, so I’m not impressed.  A subplot involving the girl’s father is also incomplete.