Garasu no Hana to Kowasu Sekai / Garakowa: Restore the World (Blu-ray release 2016-2-17) is an anime movie about two magical girls who are actually antivirus programs.  They operate in a virtual world where records of different periods of human civilizations are kept as data backups.  Their job is to defeat the viruses and deleted the affected data.  One day they meet a mysterious girl Remo, who indirectly teaches them humanity by enjoying human life.

The animations are gorgeous.  The animated versions of the world’s most famous tourist attractions are very beautiful.  The concept (not the antivirus setting, but the state of the human world) is promising, but unfortunately it falls far short of what it might achieve.  The combat sequences are average.  The really short duration does not allow the friendship to be fully developed.  The twist is interesting, but instead of explaining it in a few sentences of exposition some more plot should be added.  What actually happened finally in the human world can be very interesting as well, but it is mostly skipped over.

The human counterpart of Remo was killed in a certain incident during a protest about environmental protection.  Her mother created mother.exe program in order to bring peace to the world.  As in any other science fiction, mother.exe determined that humanity is a threat to the world instead.  Her grandfather created the Violet Operating System (ViOS) on which mother.exe runs, in the name of her grandmother, who is actually Sumire – the girl who determined to play piano for the whole world, and her virtual counterpart is the friend of the antivirus program Dual.

The Remo program is a backup of mother.exe program, with the aim of collecting the good parts from the data backups.  However, with the good parts gone, the remaining parts of the data backups actively seek the missing parts.  To deal with them, Remo upgraded the antivirus programs to treat those data as viruses, so those data are deleted.  In the climax, the antivirus programs requested ViOS to downgrade themselves to the version before mother.exe toke over.

In 1998, a family went to hike in Taiwan and shot a video in V8.  In the footage they found a mysterious little girl in red (紅衣小女孩) following them.  This video, which can be watched on YouTube, is then submitted to a paranormal TV show and became widely known.

Parts of this movie and some of its scares remind me of Ju-On, which I did not like because it did not have a complete story.  As a Taiwan production, this movie exceeds my expectations.  It captures the essence of Ju-On scares with its own additions based on Taiwan folklore, and fills it with a complete story.  Although I appreciate the atmosphere presented in this movie, and agree that ghost scenes in brightly lit scenes cannot be very scary, this movie is visually too dark for far too many scenes.  It also has some minor plot issues: the movie establishes the rule of a victim naming the next, but does not follow it strictly, and there are contradictions regarding whether the ghost/demon is afraid of light or not. 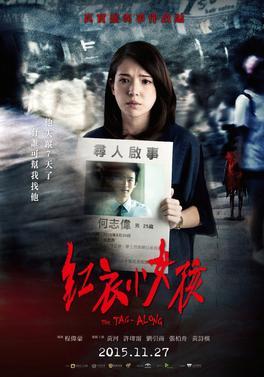 The good news is that Attack on Titan Part 2: End of the World (Blu-ray release 2016-3-23) is less bad than Part 1.  However, being less bad does not mean it is good.  At least this time the plot is not driven by stupidity, so it is no longer unwatchable.  Unfortunately, the action is significantly less exciting this time.  Anyway, we get an explanation of the origin of the titans and a government conspiracy, which almost make sense.  It’s still a very bad idea to turn Mikasa from being a very likeable character in anime to very non-likeable here.

Note: there is a post credits scene at the end.

I’m not a fan of Patrick Kong’s series of movies that centers around the idea that every romantic relationship must be flawed in some way.  However, I find 紀念日 (Anniversary) (Blu-ray release 2016-3-21) to exceed my expectations.  This time, the message is that marriage means enduring each other, but it is supplemented by a more balanced view of marriage.  It also makes use of children to add another layer of sophistication to the story.

It is worthwhile to point out that the lead actor and actress in these series of movies were involved in a romantic relationship for 10 years – as they did in the movies.  Around the time this Blu-ray is released, they announced they broke up.  So this is possibly last movie in the series that features them both.

Trumbo (Blu-ray release 2016-2-16) shows a top Hollywood screenwriter being blacklisted for work due to his political affiliation.  Ignoring how (in)accurate or (in)complete its portrayal is compared to the real history, this movie makes a good argument of people’s rights to live and work should not be affected by one’s political beliefs.  It shows how people’s life, health, friendship and family are challenged.

This sounds like a great recipe for a sex comedy.  Unfortunately, other than a few jokes involving the superpowers at the beginning, all the aforementioned superpowers are not used in tracking down and fighting the ultimate villain.  The superpowers of the main characters are wasted.  To make things much worse, the story itself is a mess, it is fragmented and jumps around only to show the flesh and/or skirt of very beautiful and less beautiful women and schoolgirls.  The ending also makes very little sense to me.

The Hateful Eight (Blu-ray release 2016-3-29) is mostly loved by the critics, but its domestic box office is not good enough, although in terms of worldwide figures it’s not too bad.  Well, talky drama is not my kind of movie.  The way I look at it the core story can be told in half of its time.  It also does not have much tension for me to get excited about.  I do not consider this movie to be entertaining enough.

Victor Frankenstein (Blu-ray release 2016-3-8) receives negative reviews.  The movie focuses on the creator of the monster, instead of the monster itself, from a point of view of his assistant.  Unfortunately, the story about the human is just dull.  We only get to see the monster at near the end, by then it’s too late for the monster to save the movie.

Kung Fu Panda 3 has an evil warrior that rises from the dead, defeating everybody including Panda’s master Shifu and most of his friends.  Panda goes to panda village to learn their way of living, and tries to find a way to defeat the warrior.

This movie provides more of the same entertaining kung fu action and interesting interactions with other characters, but it still manages to be creative and expands the story in new ways – taking inspirations from Dragon Ball Z.  With three successful movies, Kung Fu Panda becomes a franchise that few other animated movie franchises can match.

杜拉拉升職記 (Go Lala Go!) (Blu-ray release 2011-5-26) is adapted from a popular Chinese novel after being adapted for a TV series.  The first half of the movie focuses on a woman moving up in her career, then it shifts to romance.  At the beginning of the movie it states that if the company finds out two staff having a romantic relationship, one of them needs to be fired as per company policy.  The protagonist happens to take a career path in human resources, and she falls for her boss.  Guess what happens.

Whatever made the novel great is not apparent in this movie, probably because the movie does not have the time for it.  Since the protagonist got promoted so quickly in screen time and increased her salary so quickly it does not feel difficult at all.  The fact that the movie shows the salary as an increasing figure prominently periodically, buying luxury handbags, and the love interest happens to be a wealthy high ranking executive, reflects the materialistic nature of the modern Chinese society.  Although this movie is different from other generic romance drama due to its career focus, it is not different in a good way.

Other than the names of the two protagonists and the name of the company, the sequel 杜拉拉追婚記 (Go Lala Go 2) (Blu-ray release 2016-3-3) has absolutely no continuity from the previous movie.  The entire cast is replaced and their personalities are different, the company no longer looks like a traditional office building as before.  The new cast is far more good looking, so I cannot say having no continuity is completely bad here.

The sequel begins with the protagonist, at the age of 33, becoming impatient about getting married, since her boy friend feels his career is not ready for it.  Then it becomes a love rectangle.  Basically, this is just a generic idol drama, but it is still marginally more watchable than the original movie.