As much as I love to see Chloe Grace Moretz, The 5th Wave (Blu-ray release 2016-5-3) is a failure.  Every bad thing everybody says about it is true.  I’ll just say one thing.  [SPOILER WARNING] It is not unacceptable for one man to defeat the whole army – Rambo did it four times, but in this movie we’re just told it happened without seeing exactly how.  It’s just totally unconvincing.

Project Itoh wrote <harmony/> on his death bed just before he died of cancer.  The anime adaptation (Blu-ray release 2016-3-9) is reportedly very faithful to the novel, unlike The Empire of Corpses adaptation.

After a period of nuclear wars among nations, people created a utopia in which every adult has a WatchMe device installed into his or her body, for medical monitoring and uploading their personal status to medical government.  Through this scheme optimal nutrients are assigned to each person, and diseases are eliminated.  People become public resource, personal information becomes public, and they are taught to care about each other.  Harmful stuff such as wine is banned.

Three girls, who thought that installing WatchMe means losing their freedom, formed a suicide pact.  However, two survived, one of which is the protagonist.  After growing up to be an officer, she witnesses her friend committing suicide in front of her, and investigates a series of similar incidents.

People who have read the novel seem to be pleased with this adaptation.  However, this movie is not my usual idea of entertainment, because it is basically a talky drama with a lot of philosophical discussions.  Those who do not mind these attributes will be shown a never-before-seen utopian city that is also hell from a different perspective.  This is a result of pushing something good to the extreme.  It is truly original, although I’d like some more excitement.

This explanation is based on an article written by Faker.

At the end of movie, the world is taken over by the harmony program.  Everybody will always make the best choice for everybody, thereby eliminating conflicts, preventing world wars once and for all, balancing short-term and long-term benefits in a unified manner, losing individual desires and therefore individual consciousness.

In the novel, the protagonist killed the antagonist out of revenge for her father and friend.  In the movie, she loves her too much to see her lose her consciousness and cease to become an individual, so she killed her before harmony program starts.

The movie depicts the computer record of the protagonist witnessing the final moments of humanity.  This record is written in a form of Emotion-in-Text Markup Language (ETML).  Owing to harmony, the reader will automatically feel the emotion specified by the markup tags.  The title <harmony/> is in a tag form that signifies the end – of humanity.

Project Itoh wrote a 30-page draft of The Empire of Corpses / Shisha no Teikoku before he died at the age of 34.  Toh EnJoe toke over and completed the novel.  The anime adaptation (Blu-ray release 2016-2-3) toke characters, concepts and scenes from the novel but is massively different from the source.

In the 19th century, technology originated from Victor Frankenstein is used to make corpses to become a productive force in society, and even as soldiers in wars.  John Watson (from Sherlock Holmes) specializes in corpse research and experiments with the dead body of his best friend Friday (from Robinson Crusoe) in the hopes of restoring his soul.  Watson is recruited by M (Mycroft Holmes, also from MI6 of 007) to find Victor’s Notes – which documented the technology used to create The One, the first corpse with a soul.  The female character in this movie is Hadaly (from The Future Eve).

The movie is filled with action on top of a very rich story based on the super creative ideas from the novel.  However, it is universally agreed that the second half of the movie is extremely confusing.  This is caused by the movie making up its own plot, while dropping explanations from the novel.  As an adaptation this movie cannot be regarded as good.  However, due to the ingenuity of the source material, in spite of its serious flaws it is still an order of magnitude more interesting than Victor Frankenstein (2015).

Note: The true ending of the movie is shown after the credits. 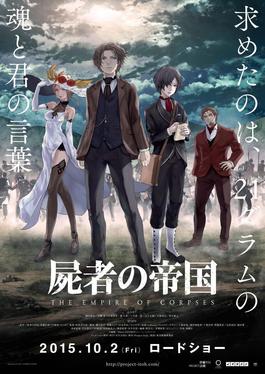 Spoilers – Explanations of The Empire of Corpses

Friendship between Watson and Friday – In the movie the actions of Watson is driven by his intense desire to restore soul to Friday.  This friendship is totally absent from the novel.  One theory suggests that this is made to honor the authors.

Alexei and Nikolai Becoming Corpses – One theory suggests that they did it since they would be killed by the Russian government anyway.  This act also shows Watson the truth behind developing the enhanced corpses, and demonstrates the importance of destroying Victor’s Notes.

Intention of M – To stop mankind from killing each other once and for all by having everyone turning into corpses, losing consciousness.

Intention of The One – To restore the soul of his bride from Victor’s Notes to Hadaly’s body, and transfer his soul to Friday’s body.

Crystals – During the climax, explosive growth of strains (from the novel) cause them to manifest in crystals (?).  (Quite a number of people noted its visual similarity to Guilty Crown anime series.)  To greatly simplify the novel explanation of soul, it is the type of strain that determines whether a person has a soul or is a corpse.  (It reminds me of Midi-chlorians in Star Wars Episode I – The Phantom Menace.)

Ending – Watson seals Victor’s Notes inside his head by using necroware.  This act causes him to lose his memory of the whole journey.  He gains a new companion Sherlock Holmes (not boyfriend).  Friday gains consciousness because he analyzed Victor’s Notes before, and it causes a type of strain to grow in him.  Hadaly becomes Irene Adler (from Sherlock Holmes).  Note: Some viewers claim the sparkle is gone from everyone’s eyes except Hadaly’s, but I have serious doubts about this observation.

Aoki Hagane no Arpeggio: Ars Nova Cadenza (Blu-ray release 2016-3-25) is the second movie following a TV anime series and a movie, which are prerequisites.  As one may imagine, this movie introduces more cute girls who are actually sci-fi battleships with awesome powers.  It provides more of the same submarine / battleship battles, but what makes this series so good is that each is won differently, from a rich story that is not just about fighting the bad guys.  To my surprise it actually provides a satisfying conclusion to the story.

Note: After the credits there is an extra scene, and some people interpret it as suggesting what is implied in the climax is reversed somehow.

I never expect being faithful to the source material will be a major weakness of a movie, but that’s the central problem of Batman v Superman: Dawn of Justice.  Not being a fan of the comic book, I found the Batman vs Superman idea to be fundamentally absurd years ago when I watched some animated movies that illustrate this, even though this idea has been around for decades (and might be accepted by comic fans).

The latest movie tries to rationalize that by civilian casualties brought by Superman fighting Zod such that it’s a little less hard to swallow.  Even if the audience were to accept this idea, during the central part of the movie, not much exciting stuff happens.  I don’t like the new Batman costumes either.  When the time comes to show the actual battle, the fight between the superheroes is not impressive at all.  Fortunately it is followed by another battle that is much better, and the scenes with Wonder Woman work exceptionally well.  Not a good start for Justice League.