拆彈專家 (Shock Wave) (Blu-ray release 2017-8-17) is a Hong Kong movie about bomb disposal.  Other than a few subplots that are not developed well, and it shows there is only one guy in Hong Kong who can dispose bomb, the production quality of this action movie is remarkably good by Hong Kong movie standard.  The overall story is not too bad.  The pacing is good.  Different incidents happen quickly enough to keep it entertaining during the whole duration of the movie.  I love the scene in which a young policeman faces the situation of having a bomb strapped to his body. 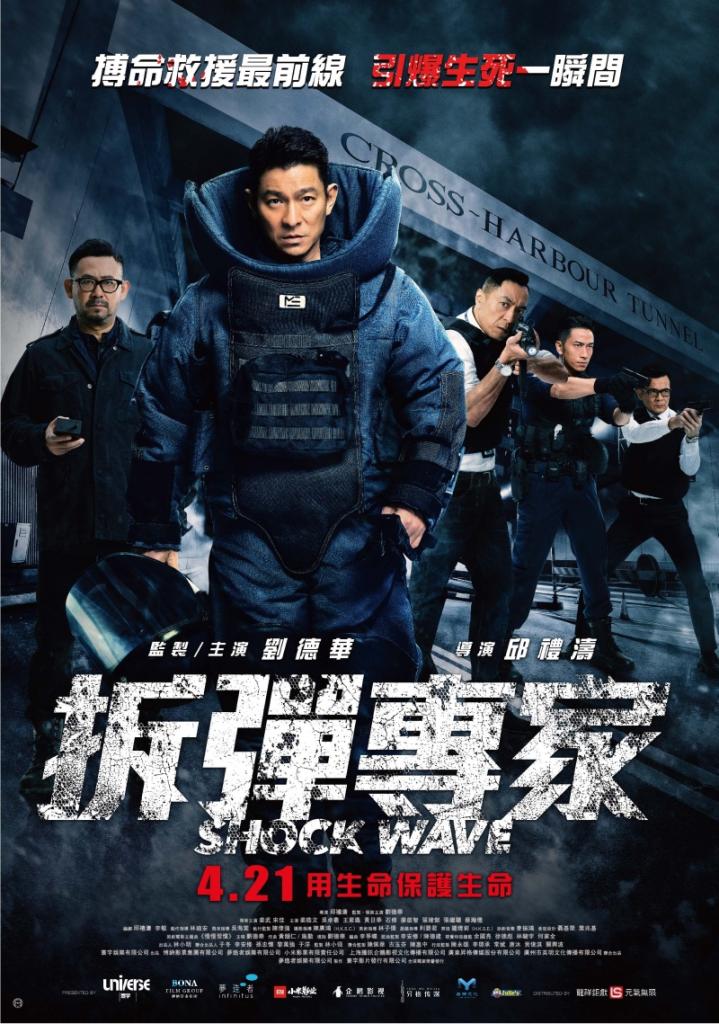 指甲刀人魔  (A Nail Clipper Romance) (Blu-ray release 2017-7-14) is a Chinese romance drama with an absurd setting: a woman claims that she only eats nail clippers and nothing else.  The movie is not concerned with the truth, but to put forward the notion that true love is unconditional.  This is fine for an average romance movie, but the ambiguity, and the lack of details of exactly what happened in the end, make it dissatisfying.

失眠 (The Sleep Curse) (Blu-ray release 2017-8-24) is a spiritual successor to the Hong Kong exploitative movies The Untold Story (1993) (which features human flesh in Chinese style pork bun) and Ebola Syndrome (1996) (which features human flesh in hamburger – notice the connection?).  Although the exploitation is the selling point of the movie, the best surprise is its story.

The protagonist is a professor specializing in the research of a medical condition that causes people to be unable to sleep.  Early on it is hinted that it may have something to do with a curse.  Then the story unfolds between two generations of people, back to the days of the protagonist’s father, who was forced to work for Japanese during the era of Japanese occupation, and met a group of women who were abducted to be comfort women (sex slaves).

If this movie is viewed as a drama, the exploitative scenes are unnecessary and the ending does not make a whole lot of sense.  However, since the story is actually an excuse for the exploitation, this excuse is the best I’ve ever watched in this category, although I do not claim to have watched a lot of this type of movies.

Note: The Japanese actor, who played the role of evil Japanese commander in this movie, wrote a blog expressing his frustration and quit acting after having finished this movie. Based on a manga series, the live action adaptation of One Week Friends (Blu-ray release 2017-8-2) involve a schoolgirl who forgets her friends every Monday, so she avoids making friends.  A schoolboy is so attracted to her that he convinces her to exchange diary with him, thereby beginning their friendship.  When things start to become better, two people who are related to the event that caused her medical condition shows up.

I have not read or watched the other versions so I don’t know if they are better, but I like this movie a lot.  In spite of the slow pace at the start, it has a complete and dramatic story, with an element of mystery that is properly explained (unlike the poor Forget Me Not), and an innocent quality of love.

The Curse of Sleeping Beauty (Blu-ray release 2017-5-2) is a horror movie.  Even though I expected it to be bad before watching it, I liked the idea enough to watch it.  Throughout his life the protagonist is haunted by dreams in which he sees a creepy looking sleeping beauty.  His dead uncle leaves him a creepy looking house, with a letter warning him not to open the basement without any explanation.

The attraction of this kind of story comes from its mythology, but its explanation is very bad.  The roles of the monsters, why they are hostile, their relationship to the beauty, are all undefined.  The horror is average, and I don’t like the fast cuts.  Worst of all is that after watching the movie you’ll discover the whole thing is just a prologue to something that will probably never be filmed.

春嬌救志明 (Love Off the Cuff) (Blu-ray release 2017-8-9) is the third movie in a Hong Kong romantic comedy series.  The story is mainly about daily arguments between the couple escalating into a break up.  It prominently features Cantonese foul language, apparently this is one of the factors that drive its box office success.  However, I don’t think this movie is as good as the predecessors.  Several scenes work really hard to make the audience laugh, but they feel disjointed with the main story.  The resolution also seems too simplistic and forced.

Kill Switch (Blu-ray release 2017-8-22) is a sci-fi movie.  A company tries to solve the energy crisis by creating a parallel Earth, then convert the matter there into energy and suck it into the original Earth.  The parallel Earth is not supposed to contain life, but of course it does for the purpose of this movie.

Although this concept sounds ridiculous, I’m interested in it since there are not too many movies with parallel universe.  However, I never like first-person view, although in here it’s not as shaky as in other movies.  Some of the visual effects look great, but the whole experience is like watching someone play a first person shooter game.  This perspective actually sacrificed the story telling because in some scenes it’s not clear what exactly happened from the first person perspective.  To make things worse, the plot lacks logic.  At some point a bad guy asks the protagonist to help without any reasonable justification.  Yet before this meeting, the bad guy’s organization tries really hard to kill him.

Fabricated City (Blu-ray release 2017-6-29) is a Korean action crime thriller.  The protagonist is framed for rape and murder.  His video game friends come to help him.  Although framing someone for a crime is not new, this movie shows a whole organization dedicated to doing this professionally.  Combined with the action scenes which are done with impressive quality and style, this movie is surprisingly entertaining.

Joe Versus the Volcano (Blu-ray release 2017-6-20) is supposed be a romantic comedy.  The protagonist has a miserable job, and he learns that he has an incurable disease and only has 6 months left.  Then he is offered a job of jumping into a volcano, in exchange for a few days of luxurious life.  Since this is a Hollywood movie, he accepts the offer in no time.

He meets three women, all played by Meg Ryan.  If we treat them as individual characters, none of them gets enough screen time for the romance to be really developed.  There is not enough comedy to be found, because the screenplay is focused on finding the soul and giving life lessons.  Therefore, neither the romance nor the comedy worked.

I made the mistake of watching Saki Live Action Movie (Blu-ray release 2017-7-5) without knowing it is preceded by a TV series.  This is an adaption of a manga about schoolgirls competing in mahjong.   Since this movie is a kind of finale for the TV series, it starts immediately in the competition.  Fortunately there are brief flashbacks so it does not hinder my understanding of the movie.

Whereas Hong Kong gambling movies always involve cheating, this movie is different.  They do not cheat, but rely on things that are irrelevant to mahjong, such as a plush toy, and invisibility – not in the supernatural sense but in the manga sense.  Since this is originally a manga series, friendship is the most important thing in it.  I suppose fans may like it, but aside from the flashbacks, there is not much drama or plot to be found here.