廉政風雲：煙幕 (Integrity) (Blu-ray release 2019-4-18) is yet another Hong Kong anti-corruption investigation movie.  It is meant to be the first of a trilogy.  Although the screenplay is more ambitious than other similar movies, it does not feel more believable.  The ultimate villain only appearing for a few seconds, and the lack of action, remove whatever little tension one may have in a movie like this.  The major witness who acts suspiciously does not help either.  The secondary witness feels like she should have more story or scenes but is completely absent for the rest of movie.  I am really disappointed as it delivers far less than its potential suggested by the strong talent and cast involved.

Having watched several movies with people doing stupid things, it is liberating to watch one where many important characters are doing smart things.  影 (Shadow) (Blu-ray release 2019-5-10) is inspired by a story of The Three Kingdoms, but too much has been changed so the names of the characters are changed as well.  The term shadow refers to the use of body doubles of important people to avoid assassination – which is exactly what happened in Star Wars: Episode II – Attack of the Clones (2002).

Of the relatively few mainland China movies I’ve watched in the last decade, this movie is the best.  When I thought all possible beautiful kung fu moves have been seen before, it manages to come up with something visually new.  More importantly, the advancement in picture is revolutionary.  Whereas Spider-Man: Into the Spider-Verse advanced the animated picture, this movie turns the pictures of reality into gorgeous Chinese ink paintings.  Technicality aside, the story is also solid.  Its power struggle is filled with deception, and some important characters are not really who they seem to be.  Although the movie starts slow, it combines a really good story with gorgeous visuals to be both entertaining and artful.

Who told the king the hiding place of the real commander?  The captain did, since the protagonist and the wife cannot.  Recall that the king shot him using an arrow but missed him.  He picked the arrow up and hurt himself.  He is loyal to the king, and the arrow incident is merely a ruse to allow him to find the real commander, because the king has suspected the protagonist is a fake since the beginning and asked the protagonist to play the musical instrument.  The evidence of his loyalty is seen when he brought the king to the dead sister, and is also seen in an important deleted scene – the king met him in the bamboo forest and revealed to him the plan to retake the city was made by the real commander and the king together.  The king appearing to be cowardice and seeking for peace, firing two important military personnel and accepting the unreasonable request of marriage, are therefore also a ruse, in order to deceive the enemy.

Who ordered the killing of the protagonist and his mother?  The real commander did but tried to the frame the king for it, because otherwise he could not have known the death of the mother in such a short time.  Besides, he has every reason to kill the protagonist after knowing the wife’s affection for and sleeping with the protagonist.

What happens to the wife at the end?  At the beginning of the movie it states that the wife needs to make the most important decision in her life.  This decision would be choosing between opening the door and revealing that the protagonist is a fake, or not doing it.  She probably witnesses the protagonist becoming the new king.  If she chooses to keep silent, she becomes the queen.  This scenario is the most likely, as I will explain why the other scenarios are less likely below.

Given the loyalty of the captain to the king, it is not unreasonable to consider the possibility of the captain killing the shadow commander.  However, it is not practically a simple thing to do, because the other officials may not believe him.  More importantly, if this happens the wife no longer needs to make that important decision, contradicting the movie.  If he kills the protagonist, it is very questionable whether he can become a king.  If he keeps silent, he gets a promotion to commander.  In fact, in several other alternate outcomes he always gets to be promoted.  If the real commander wins and becomes a king, the captain becomes a commander as promised.  If the king wins but the protagonist is killed by the enemy, the captain will also get promoted.

There is yet another popular suggestion that the dead king is a shadow, and the real king comes out to kill the protagonist.  If this happens, this again contradicts the wife’s need to make the important decision.  Since the king has already deceived everybody, giving him yet another deception would be redundant for the story.

Rim of the World (Netflix) has four kids saving the world from alien invasion, since they are tasked with bringing the key to winning the war against aliens to the Jet Propulsion Laboratory.  I feel that some of the kids’ behavior and dialogue are pretentious to be more adult than they are.  I cannot understand why there is only one alien walking on the ground when there are many UFO flying around.  I also cannot see how some of the parents survived when cities are wiped out, or how there can be a general at a remote location sitting in a safe place to talk to them when the whole world is threatened.

After completing a mission a stupid kid that just stands there in front of the monster, whom he knows is coming back up at any second, can almost be forgiven.  There is an even bigger stupidity that deserves its own classification.  I like to call it logical stupidity.  A bad guy threatens the protagonists to get the key so he can sell it for money.  This business model cannot work at all.  If the military cannot get the key, he will die too.  By interfering with the delivery, his action directly increases his own chance of doom.  I cannot call this a good movie by any measure.

The Prodigy (Blu-ray release 2019-5-7) is a horror movie about the soul of an evil man taking over the body of a child.  I never liked evil child movies except The Omen (1976), so I may be biased.  Anyway, this one is even worse than what we had before.  There is not much horror to be found.  As for the plot, I don’t know which is more annoying: murderous child or stupid parents.  The parents do deserve to die.

Serenity (Blu-ray release 2019-4-30) got worse reviews than it deserves.  The ex-wife finds the protagonist to help murder her new rich husband who beats her up, on a fishing boat.  We see the moral conflict of the protagonist and the supporting characters trying to influence his decision.  I think the story is solid until the twist, which is a little odd.  I think most people gave it poor reviews because they cannot accept the twist.  I’m in the minority who do.  In retrospect it could have been made as a more generally acceptable movie without the twist.

I really liked Happy Death Day (2017).  Happy Death Day 2U (Blu-ray release 2019-5-14) continues the story and turns it into a sci-fi comedy.  It turns out that the time loop was caused by a science experiment, and it even transports the protagonist into a parallel universe where her mother is still alive, but her boyfriend is with somebody else.

Although the sequel retains the slasher element in a few parts of the movie, it no longer generates the tension required, and there is no mystery solving because it is fairly obvious.  I like this sequel too and appreciate its attempt to not simply repeat the same formula, but I can also understand it is no longer a slasher movie that people want to see, accounting for the lower box office.

Greta (Amazon) starts with the protagonist bringing a lost bag from the subway to its owner, who befriends her but turns out to be a psychopath.  It is reasonably effective but there are parts of the story that are not convincing.  In particular, they choose not to seek help from the police even in a dire situation.

Backdraft (1991) (UHD Release 2019-5-7) is a classic firefighting movie, and is clearly one of the best of all time.  The fire is outrageously beautiful in this movie, and has not been matched in the following decades.  Although the picture is oversharpened, there are real details to be seen, giving an enjoyable 4K release.

Backdraft 2 (Blu-ray release 2019-5-14) is a disappointing direct to video sequel.  The young boy in the first movie has grown up to be an arson investigator.  The investigation plot is not believable.  The supporting characters are underwritten.  The major problem, however, is something more much fundamental: this is not a firefighting movie at all.  There are only a few scenes with fire, and some are done badly with poor CG.  The young boy looks calm when surrounded by fire in his room because he cannot see the CG fire at all. 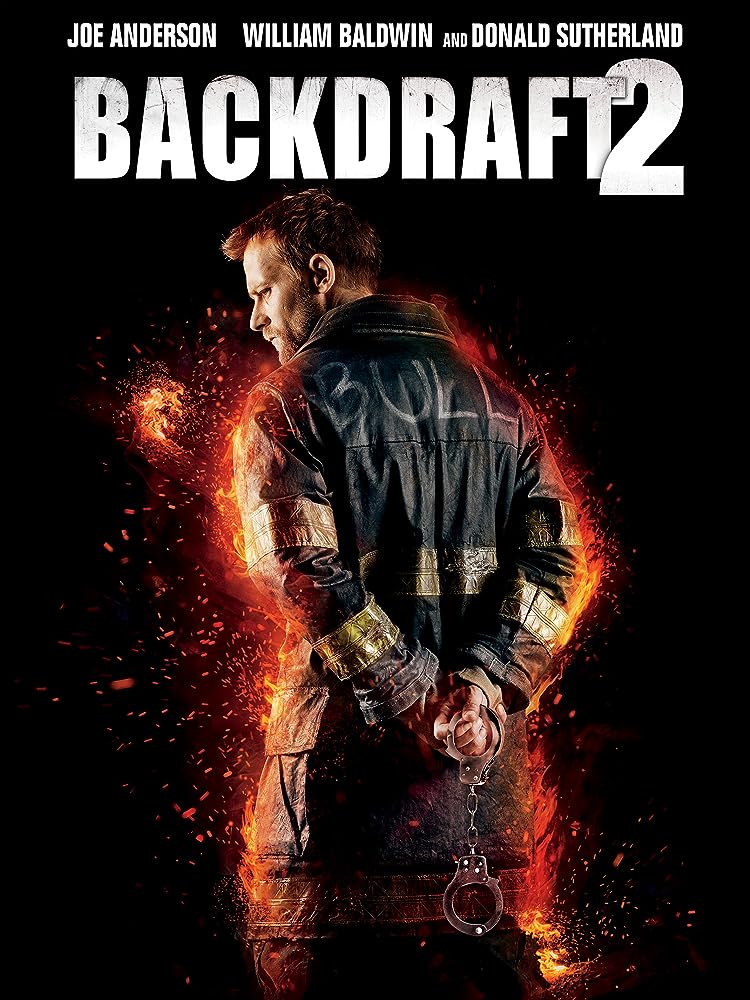 Before the Coffee Gets Cold / Café Funiculi Funicula (Blu-ray release 2019-4-18) is adapted from a Japanese novel.  By drinking a coffee at a particular seat in a cafe, a customer gets to travel in time to meet someone else inside the cafe.  However, there are a number of rules.  In particular, what has already happened will not be changed, no matter how one tries to change the past.  As the owner explained, what can be changed is one’s mind.

I think the movie can best be described as a time travel version of the Midnight Diner TV and movies.  I think this one is actually better because people get to face their past mistakes and move on to live a better and improved life, although it is also more tear jerking.  Most importantly, the time travel mechanism not only provides a plot device but is integral to the climax.  The last story is also intriguing, time travel-wise.

The Pool (Blu-ray release 2019-5-15) is a Thai horror movie about a man being trapped in a dried swimming pool, with a CG crocodile to accompany him.  There is no mystery about how there can be a crocodile.  It literally climbs out of nowhere and crawls into the pool.  This is an incredibly stupid movie from start to finish, with the protagonist making the stupidest decision that could possibly be made in order for the movie to exist.  At the beginning of the movie when his friend tells him the water of the pool is being flushed away, he chooses to sleep on the waterbed instead of leaving the pool, and traps himself.

Warning: Dog lovers should stay away from this movie.  Even I do not own a dog, I find this movie tasteless.