Independence Day: Resurgence is slightly entertaining, but there are multiple problems with the movie.  The most important of which is the lack of tension.  In spite of the supposedly much bigger threat, there is never any moment feeling helpless.  The people always have a plan to combat the aliens.  The second problem is having too many characters – although I like having the original cast back (except Will Smith, who declined), the inevitable inclusion of many new young characters (to prepare for the next sequel) means that most of them are underwritten.  Unlike some media analysis, I disagree that having Will Smith will save the box office.

Even without having seen the original manga or anime adaptation of Bakuman (Blu-ray release 2016-4-20), I can tell this is a very good live action adaptation.  Two highschool students team up to draw manga, hoping to get it published by the influential Shonen Jump magazine.  Although drawing of manga sounds far less interesting than any other possible new ideas conveyed from manga, this movie manages to create an inspirational story with elements of rivalry and friendship, while showing the hard life and the intense pressure of manga drawing.

The movie tells a coherent and complete story with good pacing.  In order to illustrate the rivalry of drawing manga in a non-boring way, the movie adopts a clever idea.  I only have two nitpicks, one being the scratching sounds.  I’m a tiny little bit disappointed by not seeing the promise between the boy and the girl come to fruition, even though I understand it’s simply impossible for the movie as it toke the anime 75 episodes to get to this point.

The Inerasable (Blu-ray release 2016-7-2) is Japanese horror mystery movie based on a novel.  It starts with a haunted apartment.  Usually haunted house movies spend a limited time to find out the cause of the haunting, then try to eliminate it or run away from it before too late.  However, this movie is different.  The entire movie is an investigation – it works like a detective movie, because the haunting spans several generations and multiple families.  By horror movie standards, it has the least amount of scares one can imagine.  I’m not particularly impressed by its horrors but the story is quite good.

賭城風雲III (From Vegas to Macau III) (Blu-ray release 2016-6-23) is a trash movie that happens to have the top cast one can find from Hong Kong.  The predecessor was quite entertaining, but this time it is only a mess with jokes that do not work, and CG action sequences about unimportant characters that are inconsequential to the story. 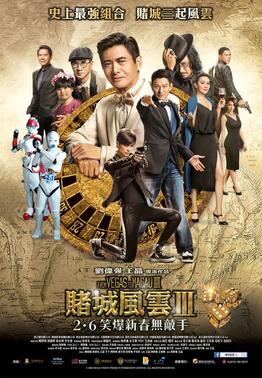 老笠 (Robbery) (Blu-ray release 2016-6-8) is a Hong Kong cult movie.  A man, having no money to spend with friends, takes a job at a convenience store.  One by one more characters show up, many of which are crazy in some ways, leading to violence.  Through the series of crazy events we are told the theme of this movie: “This city is f___ing stuck!”  It illustrates the many kinds of pressure Hong Kong people face, and refers to actual news events.  I think the ending is very odd though, adding explanations that are not necessary and it is not coherent with the movie.  Anyway, this is going to be one of the most special Hong Kong movies in this year.

orange (Blu-ray release 2016-6-15) is a Japanese youth romance movie adapted from a manga.  I watched it only because of its time travel aspect – the protagonist receives a letter from herself 10 years into the future.  This premise is interesting because it is unusually seen in time travel movies.  The letter foretells the events that will happen – she will fall in love with a transfer student, and asks her to avoid doing or not doing things that will cause her to have regrets in the future.

As a time travel movie, I’m slightly annoyed by the protagonist being too passive to avoid the predicted negative outcomes, even though I understand the story is made this way to create obstacles for the romance.  Another thing really odd is that her future husband, being a good friend of the boy, is far too willing to give her up and goes through no struggle at all.  Overall I find nothing noteworthy from all the potentially interesting aspects, and am disappointed.

Il Mare (2000) / The Lake House (2006), the Korean and the American remake of romance movie also based on the letter-from-the-future concept, are far better than this.

Tale of Tales is a collection of three fairy tales, in their original adult and horrific form.  The best thing with it is that it’s not the common Snow White or Cinderella that everyone knows.  The first story is about a queen who eats the heart of a sea monster in order to have a child.  The second one is about a king who is obsessed with a flea, and does not care about her daughter and forces her to marry an ogre.  The third one has a lustful king who tries to woo a woman whom he has not seen, but unbeknownst to him that woman is actually an old lady.

Although I like one of the three stories only, the whole movie is commendable because it’s rare to see fairy tales nowadays with their original horrific nature intact.  Although its visuals are not like typical Hollywood movies, its style matches the period and the nature of the tales.

London Has Fallen (Blu-ray release 2016-6-14) is the sequel to Olympus Has Fallen.  Our hero protects the US President in London when all hell breaks loose.  The things that occurred in this movie is so impossible that I think it makes Die Hard look realistic.  This is not necessarily a weakness though, and perhaps help differentiate it from other action movies.  I enjoyed it.

Girls und Panzer der Film (Blu-ray release 2016-5-27) is the movie sequel to the 12-episode (plus 1 OVA) TV series in 2012.  The protagonist is born in a prestigious family that is renowned for tank warfare.  In the TV series, she transfers from her previous school to the present one in order to run away from it due to a certain event.  However, this school resumes tank warfare and the student council forced her to join this practice.  Gradually she regains the confidence and gains the trust from her friends, and competes in inter-school tank warfare competition, in order to save their school from being closed down.

This is the type of anime where practically all characters are cute girls or female.  There are only a few men who have minimal screen time, and most of them could have been eliminated, except the bad guy from government who decides to close down the school.

I think it is not essential to have watched the TV series first before watching the movie sequel.  The movie starts and ends with a large-scale tank war.  Only during the middle part of the movie does it have some sort of story and character development.  Basically, the school is still being closed down despite what the girls achieved in the TV series, because the bad guy says that verbal agreement does not count.  Anyway, previous enemies now join and help the protagonist to combat a new enemy – university team with a whole lot more experience and firepower.

To be honest, in the movie I often confuse which tank is which side, but I’m sure it’s just me not paying enough attention.  In both the TV series and the movie I see something that’s absent from most other anime – strategy and tactics.  That is not to say the usual combat-oriented anime (such as Gundam) does not have them, but with tanks that inherit the real world limitations and flaws, here strategy and tactics and teamwork allow the underdog to win (whereas Gundam is certainly not an underdog for most of the time).  In spite of the real world nature, the abilities of tanks here are stretched to provide more interesting tactics and scenes, such as riding a roller coaster.

Note: the movie is followed by a special episode Alice War!

My Love Story!! / Ore Monogatari!! (Blu-ray release 2016-4-27) is a romantic comedy adapted from a manga.  The protagonist looks like a scary gorilla.  One day he saves a girl.  They fall in love with each other, but he mistakenly thinks she loves his handsome buddy instead.  The whole movie is constructed on top of this huge misunderstanding.  Although it is a bit tiring to see one single misunderstanding stretching for such a long time, the comedies and the sweetness save it to become an enjoyable movie.