Doctor Strange gives us a new superhero from the Marvel universe.  A neurosurgeon, after losing his hands in a traffic accident (note: it’s really bad to look at your smartphone while driving), goes to Nepal to learn mystic powers in the hope of healing his hands.  Then he fights evil sorcerers and a demonic being from another dimension.

Three things stand out – impressive CG that pushes Inception (2010) style visuals to the extreme, a lot of good jokes, and an ego that rivals Tony Stark’s.  Although the climactic battle is more like a trick than an exciting battle, this is the one of the most entertaining superhero movies in 2016.

1. There are two extra scenes during and after the credits.

2. We get a fake Hong Kong from Hollywood, again.

Kingsglaive: Final Fantasy XV (Blu-ray release 2016-10-4) shows the Kingslaive – an elite guard of a kingdom – defending against an invading empire.  As in Final Fantasy tradition, this movie-length CG cutscene is visually awesome.  However, that’s the only good thing I can say about it.

The action scenes, although awesome, are sometimes confusing to watch: The scenes are crazy fast, with moving camera angles just because they can do whatever they want in CG.  Its style of teleportation makes it worse, and in the climax sequence, the big guy uses the same teleportation as does the protagonist, so it is sometimes harder to figure out who we’re watching.  Speaking of which, the big guy does not look that much different from the demon he’s dealing with when things move so fast.

Compared to the story, the action sequences are just a minor problem.  The story is formed based on an illogical reasoning: when the enemy destroys your home, and your own country fails to counter the invasion, you think your country is not properly doing its job, so you join the enemy and attack your own country?!  There are several other problems, one of which is that how can the survivors run away without being attacked at all, and I don’t think it’s explained clearly enough why the survivor’s job is so important.  It is also really odd that the number of good guys in the movie can be counted in one hand.

Kingsglaive: Final Fantasy XV is followed by the anime Brotherhood: Final Fantasy XV (Blu-ray release 2016-9-30).  However, they only have a little relation to each other.  Brotherhood mainly gives some background to the characters in the video game.  In the context of Kingsglaive, in Brotherhood we learn why the prince is hurt when he was a child, and why we never see his mother. 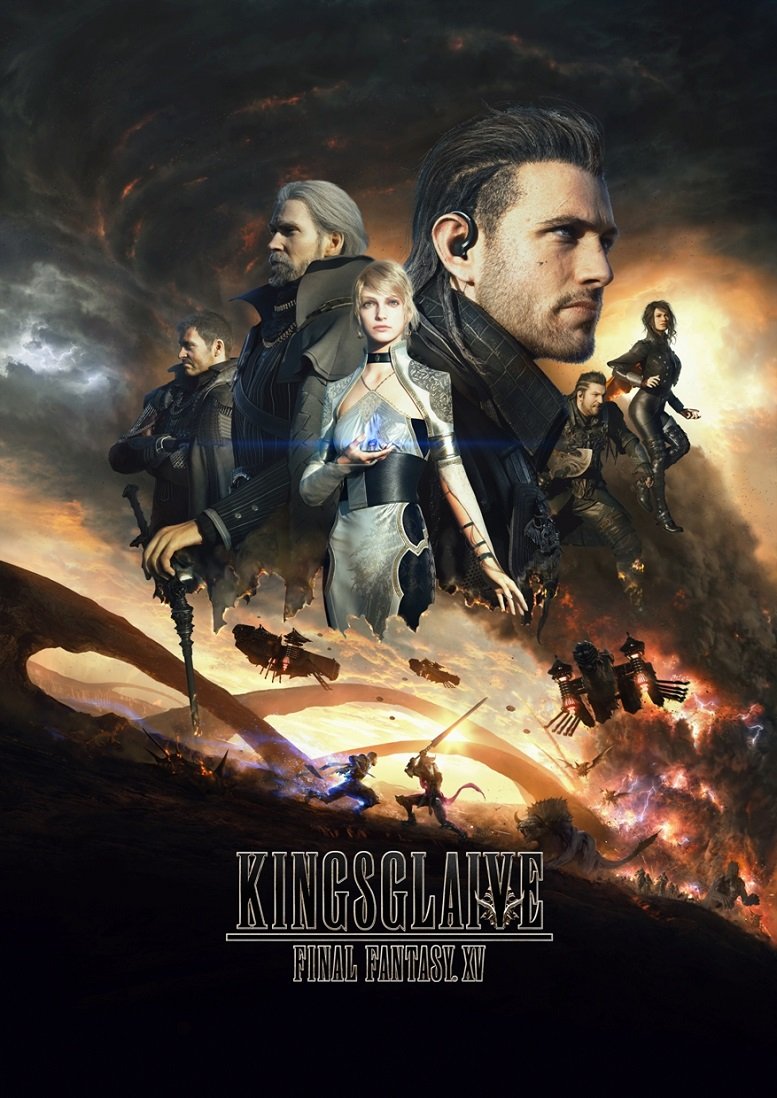 The Stare (Blu-ray release 2016-8-26) is a Japanese horror movie featuring an idol.  It follows the structure of Ju-On: People go to a haunted place, become cursed and eventually die.  The protagonist eventually learns the cause of the curse and try to remove the curse.  The creepy little boy in Ju-On is replaced by the stare of a little girl in this movie.  Unfortunately, the well proven Japanese horrific eye is replaced by a CG eye, which looks cartoonish instead of scary.  The unsuccessful scares are sparse, and the story progresses slowly.  I never liked any Ju-On, and this is even worse.

Alice Through the Looking Glass (Blu-ray release 2016-10-18) tells the story of Alice traveling back in time to save Hatter’s family in order to save the dying Hatter.  This sequel is badly reviewed and did not do well in the box office.  My take is that this sequel is a sad movie and not funny, as compared to the 2010 predecessor, which was at least a little funny and somewhat entertaining.

This movie is sad because Alice and her mother are forced to sell their ship or risk losing their house, Hatter is dying instead of being funny (this task is now owned by the Time guy, who is just annoying), and kicks Alice out of his home, Alice goes back in time only to witness tragedies instead of being able to change the past, Hatter’s first hat was thrown into a rubbish bin by his father, and the good White Queen actually caused the Red Queen to become evil.  For a supposedly-fun family movie, aren’t these sad?

Hong Kong movies often have dumb senseless plot that serves only as an excuse to show some action and/or comedy scenes.  Once in a while something distinctly different occurs – 寒戰II (Cold War II) (Blu-ray release 2016-10-19) follows the previous 2012 movie by the bad guys kidnapping the wife of the new police commissioner, and demanding the release of a prisoner.

There are a limited number of action scenes, which are done well, but this is clearly not the selling point of the movie.  The aggressive plot expands to a conspiracy involving the top government officials – a subject rarely seen in Hong Kong movies.  This is a timely movie that reflects the growing distrust and dissatisfaction with government in reality.  Perhaps together with the top cast, it propels the box office to a new level and is extremely well received by the audience.

Although the movie is engaging, the more I think about it the more problematic it is at a basic level – such as why a good guy suddenly becomes a bad guy for no reason, and whether it is realistic that a police commissioner does everything by himself, etc.  Reviews of this movie are not very positive either.  Anyway, regardless of any flaws, this series is elevated into the must-see category.  And we wait for Cold War III. 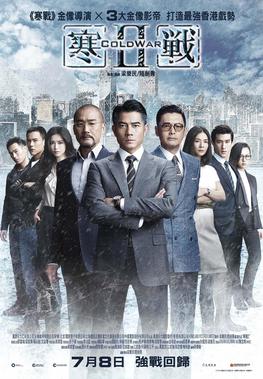 Don’t Breathe (Bu-ray release 2016-11-29) tells the story of three people trying to rob a house owned by a blind veteran.  As one may guess, they totally underestimate the threat of the veteran, and quickly it becomes a survival mission.  It succeeds in building up tension, and have several twists and shocks.  There is some fair amount of stupidity involved, but I think this is still a thrilling achievement.

Lights Out (Blu-ray release 2016-10-25) is a very competent jump-scare horror movie made by a first-time director.  The simple plot involves an evil being, who is powerful in the dark but fears light, haunting a sister and her little brother.  Yet the possibly crazy mother considers that evil thing as a friend.

This movie succeeds because its pacing is good, it incorporates the unique implications of light and darkness to create effective scares, as well as nice ideas about using a smartphone and a certain remote control to survive.  I also love that it has a complete closure – not even a slight hint of remaining evil at the end.  Most importantly, the major characters do not do stupid things.

Nerve (Blu-ray 2016-10-25) adapts a novel about a game that allows anonymous people on the internet to pay and dare the protagonists to do crazy or even life-threatening stuff.  I almost wanted to stop watching it during the time-consuming initial setup scenes.  It’s not until the protagonists are dared to do really crazy stuff does the movie become interesting.

The whole thing is a pretty new idea – it originated from a novel after all – and I’m pleased with the idea and how it ends.  It is not a kill-the-bad-guy ending – it is rarely (if not never before) seen and involves a necessity to affect all the anonymous people who watch the game.  This is a commendable movie and its quality is generally not limited by its small budget.  However, there are certain transitions between scenes that need improvement.  In particular, a friend becomes an enemy for no good reason, then the enemy turns back into a friend for absolutely no reason.

Money Monster (Blu-ray release 2016-9-6) is a unique drama about a guy who takes the host and the crew of a financial TV show hostage, after suffering heavy losses from following the host’s stock recommendation.  There are nice ideas to be found from this drama, with certain events taking a turn different from what the audience normally expects.  On this basis, I found the movie to be quite interesting.  However, considering its message about Wall Street, there are better movies before that depicted the dark side of Wall Street better.  The ending is a little unusual with respect to who is hurt and who is not hurt, but it actually makes perfect sense for delivering its message.

The sequel has more of the same as before.  Although there are new characters, new elements and new fighting moves introduced, the movie is too long for the simplistic story it has – the villain is not dead and brings new enemies to fight the protagonist, while the girlfriend goes away due to a misunderstanding.  Shortening the movie and cutting annoyingly dumb dialogue should help.

A bigger budget also upgrades the CG from very bad to bad.  In spite of the new stuff, none of them really gives more excitement than before.  Even with these flaws it is still more enjoyable than the average Kamen Rider movie.