Avengers: Infinity War continues from Thor: Ragnarok (2017).  The movie starts by showing the fate of the spaceship carrying the last Asgard civilians.  A super villain appears, tries to gather all the Infinity Stones and wipes out half of the universe.  Dozens of superheroes try to stop him.  If you do not know what the Infinity Stones or Asgard are, you have not done your homework, i.e. watch the 18 movies before it.

It is remarkable that a movie that contains so many characters manage to present coherent subplots with different superheroes teaming up in new ways, maintain continuity with all the previous movies, and still provide new visual spectacles of superhero battles.  At the end it reminds me of The Empire Strikes Back (1980), although its tone is closer to Harry Potter and the Deathly Hallows – Part 1 (2010) – this is indeed a Part 1 movie after all.

Note: There is one post-credits scene.

奇門遁甲 (The Thousand Faces of Dunjia) (Blu-ray release 2018-3-27) is a Chinese fantasy movie.  A group of people try to protect mankind from evil daemons, who happen to be extra terrestrial in nature.  Ironically, they get their powers from a good and pretty daemon.  The screenplay and the many characters are just excuses to show a lot of CG-infused battles.  In spite of having one of the most famous action director from Hong Kong, there is very little worthy human action to be seen.

Fireworks, Should We See It from the Side or the Bottom? (Blu-ray release 2018-4-18) is an anime based on the 1993 live action Japanese TV drama of the same name.  A schoolgirl tries to get away from home and is caught by her mother, who is moving away to live with the third husband.  The protagonist, who has a crush on her and in a rage, throws a beautiful glass ball she found earlier.  This act causes time to reverse, so he gets a chance to choose a different path.  However, the world also becomes different.

This is a charming and pure love story with spectacular dream-like visuals.  Following the perfect Your Name (2016) time travel anime love story, we get another great time travel parallel universe anime love story in 2017.  Although it is rather clear what must happen at the end, it is not tragic at all and at no point does the movie try to be tear jerking. 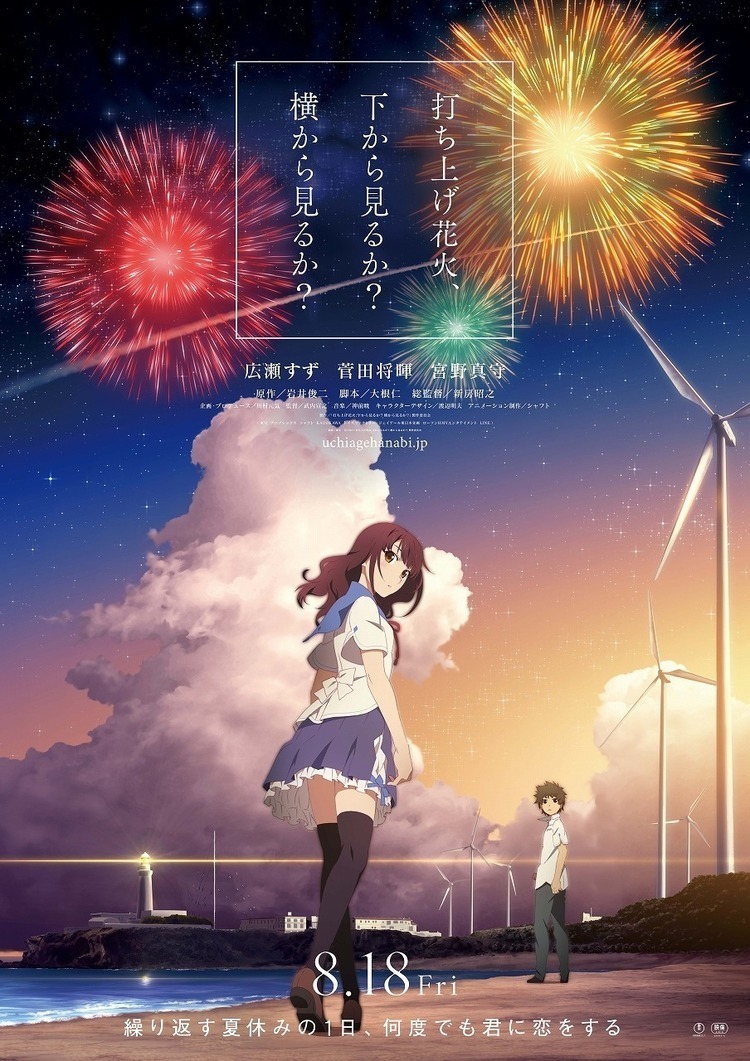 Molly’s Game (Blu-ray release 2018-4-10) is based on the true story of an Olympic mogul skier, who went on to host underground poker games for rich men and celebrities.  This is a fascinating story, helped by some dramatizations – like the great father-daughter scene, which helps rationalize and bring closure to the whole story, is unfortunately not real.

After watching this movie, it changes my impression of a certain actor.  I used to love Spider-man 2 (2004), but now it is less likely I will watch it again in the future.  If you do not know why I’m talking about an actor who does not appear in Molly’s Game – the movie, google is your friend.

All the Money in the World (Blu-ray release 2018-4-10) dramatizes the real story of the kidnapping of the grandson of the world’s richest man in 1973.  The key point is that the grandfather does not want to pay the ransom.  He thinks that everyone wants a piece of his fortune, so he loves his collection of art more than family.

Even though it is dramatized there is not much tension in the movie.  Its strength lies in the acting of the cast especially the grandfather, and the way the screenplay contrasts his love for the child in a painting rather than his real grandson.  As unreasonable as things may seem to outsiders, it provides rationale for everyone’s actions and thinking, and why events unfold in the way they do.

Certain details seem to be left out of the movie on purpose, especially concerning the ex-porn actress mother.  At the end we do not know what happens to the couple regarding their marriage.  The reactions of some people in this movie towards certain events do not seem normal to me.  If these minor issues are addressed it will be an ever better movie.  Something in this movie reminds me of the heart warming sisterhood in Our Little Sister / Umimachi Diary (2015), which is a good drama.

The Commuter (Blu-ray release 2018-4-17) puts Liam Neeson’s character on a train.  He has just been fired, and a mysterious woman offers him some cash to find a person on the train.  She also threatens him about the safety of his family.  This is not exactly Taken (2008) as I had in mind – it is slightly intriguing but with less action and tension than I thought.  There are some details that seem impossible, such as how exactly the woman can know everything and perform something that cause the climactic sequence.  So it is even more unrealistic than Taken.

Net I Die (Blu-ray release 2018-4-12) is a Thai horror movie.  The title is a pun on “net idol”.  At the beginning of the movie, we see a net idol doing a live broadcast to Facebook.  She is tagged to a video of another net idol who committed suicide a year ago, and then she is killed.  Other people are also mysteriously tagged as well, and one by one they are killed by a ghost too.  The horror is slightly below average and is somewhat repetitive. The plot is straight forward with no surprise.  On the positive side, at least it explains almost everything.

Maze Runner: The Death Cure (Blu-ray release 2018-4-24) begins with the protagonist trying to rescue his friends, and ends with a final showdown against WKCD.  While I really liked the first movie (2014), and considered the second movie (2015) to be still interesting, I’m not especially thrilled by this movie.  Although the action sequences are fine, there is no longer any mystery left in the plot.  The climax is also considerably less exciting than the opening sequence.  Given the absence of movie ending to the Divergent (2014) series, and that this movie almost did not get made due to a critical accident involving Dylan O’Brien, I should not complain.

Deep Blue Sea 2 (Blu-ray release 2018-4-17) is a direct-to-video reboot of the 1999 predecessor.  Basically, a research lab increases the intelligence of sharks significantly.  They can dig tunnels to escape from the electrical perimeter, communicate, and coordinate to destroy the whole research lab.

There is nothing new here except the unnecessary gore, and I think certain aspects become worse, such as the characters and increased amount of fake CG.  The plot structure has worsened too.  In the original movie, that the sharks become so intelligent that they become a huge threat to the structure of the laboratory is not revealed until late in the movie.  Now it is shown upfront.  The rest of the movie is just about watching how people try to escape but get eaten.  Additional cleavage is of no use here.  Since I liked the original, this sequel is disappointing.  That being said, while it is not a commendable shark movie, it is not as bad as the other typical ultra low budget ones.